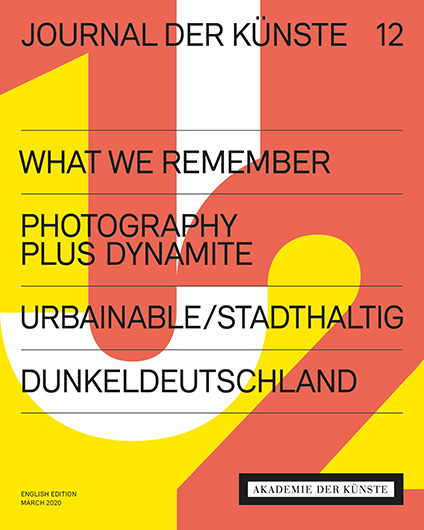 The Akademie der Künste will be following the themes of Europe, cultural memory, and sustainability in 2020. In issue 12 of the Journal der Künste, we provide insights into the specific projects for the year, alongside discussions that follow on from last year's themes and are geared toward platforms for 2021.

This topic is also addressed in the Carte Blanche section, based on the exemplary influence a rethink of the library as institutional and transformative space can have on urban fields of conflict.This is what the designs and buildings of the Academy member Francine Houben and her architectural firm Mecanoo stand for.

In a lecture given by Aleida Assmann in September 2019, on the occasion of the dance project "What the Body Remembers", the central focus became an awareness that the body's memory constantly updates incarnate knowledge, the canon of cultural memory, and brings the "excarnate" space of the archives and museums to life. A prime example of this is Ixmucané Aguilar's photographic work on the descendants of the Herero and Nama genocide in Namibia, which forms her final thesis at the Weißensee Academy of Art Berlin.

German history since the end of the GDR serves to show how memory and justice relate to the current situation in Germany. Klaus Wolfram, one of the co-founders of the Neues Forum (New Forum) citizens' movement in September 1989, asks where the energy of the political awakening among East Germans has gone after thirty years (reaading sample as PDF). It becomes clear how a dominant West German narrative in the media displaced and disempowered other perspectives. This is also what the personal essay "Dunkeldeutschland" ("Dark Germany") by the young writer and staff member of the Academy Katharina Warda is about.

Volker Braun's speech, following the controversial debates about the contribution by Klaus Wolfram at the General Assembly of the Academy, shows that collective memories continue to have an effect, determining the present even beyond state and media representation.

Michael Ruetz's photo series on the transformation of East Berlin over the last fifty years documents the described process of displacing historical, collective, and individual experience.

Enis Maci's contribution examines the rhetoric of the new right.

Further articles are about political resistance using artistic means in the work of John Heartfield, whose exhibition at Pariser Platz provides a unique overview of the techniques of political intervention; and a look back at Christoph Schlingensief's filmic interventions.

Based on the example of a finding from the archives, the Academy examines the political potential of artistic methods from a historical and contemporary perspective. (reading sample as PDF)

The Academy's "Labor Beethoven 2020" project – linking the innovative power of Beethoven and the current music scene through international cooperation between young composers and musicians from Tel Aviv, Thessaloniki, Basel, and Berlin – will draw to a close this March.

Robert Kudielka examines the material of the colour white as the starting point for a research project by the Visual Arts Section, which will lead to an exhibition in the autumn of 2021. We remember the composer Georg Katzer, who founded the Academy's Studio for Electroacoustic Music, and György Konrád, a major European writer who had a decisive impact on the Academy in the 1990s as its president. They both died in 2019.

In the "News from the Archives" section, we introduce the almost forgotten writer Hedda Zinner, the filmmaker Eberhard Fechner, and the newly digitised exhibition catalogues of the Akademie der Künste, 1786–1943.

And last but not least, as a member of the Society of Friends, President of Deutsche Grammophon Clemens Trautmann remembers the epochal recordings of Beethoven's works.

You can find the digital version of the 12th issue here.

The Journal der Künste is available in German and English and is free of charge. If you wish to receive the print version of a single issue or if you are interested in a subscription, please send an email to info@adk.de.

We use cookies to give you the best possible experience on our website. You can change your setting at any time by clicking on the "Cookies" link at the bottom of the page.